Forman Christian College was founded in 1864 by Dr Charles W Forman, a Presbyterian missionary from the USA. The college was initially known as the Lahore Mission College, but in 1894 the name was officially changed to Forman Christian College in honor of the founder. In the early years, degrees were awarded through the Calcutta University. College level instruction was interrupted in 1869 due to the illness of key faculty members. College classes resumed in 1886, with degrees being awarded through the University of the Punjab. In 2004, FCCU became a chartered University and from 2009 onwards has awarded its own degrees.

The campus was located in the Anarkali (Nila Gumbad) area of Lahore for many years. Four major buildings were constructed by the college on that campus by 1916, and Ewing Hall, built in 1916, is still used as a hostel by the college. In 1940 the college moved to its present spacious campus of over 100 acres on the scenic banks of Lahore Canal.

For many decades, FCCU has been widely recognized for its meritorious work of nurturing and consolidating the social and intellectual capital of Pakistan. The college motto, “By love serve one another,” has been a guiding principle for Formanites throughout the history of the college. Among the graduates of the college are two Presidents of Pakistan, a Prime Minister of India, the first Chief Justice of Pakistan, a number of Governors and Chief Ministers of the Punjab and other provinces, an Attorney General of Pakistan, two Foreign Ministers of Pakistan, a President of the Security Council of the United Nations, numerous Ambassadors to other nations, a Chairman of the Atomic Energy Commission, a Chairman of the Senate, several Speakers of the National Assembly, numerous Generals and Admirals and an equally impressive list of leaders in the fields of education, law, medicine, arts and entertainment.

FCCU has been a leader for the development of curriculum among the universities of Pakistan. Through the years the college introduced into the curriculum such subjects as the Sciences, Economics, Psychology, Geography, Technical Chemistry and Sociology. FCCU is the first college in the subcontinent in whose laboratories research work of Nobel Prize caliber was conducted and Dr Arthur Compton received the Nobel Prize in 1932 for research conducted, in large part, at FCCU. In 1902, the college was the first college in the Punjab to admit women.

FCCU also has a distinguished record of performing service for the nation. At the time of Independence, the college converted two hostels into a hospital for refugees seeking medical assistance and thus began United Christian Hospital. During the Kangra Valley earthquake disaster in 1905, Dr JCR Ewing organized and led the relief effort. Similarly, at the time of the Quetta earthquake in 1935, the college did devoted relief work, this time under the leadership of Prof Jagun Nath. Social service by students was made popular by Prof DJ Fleming many years ago. 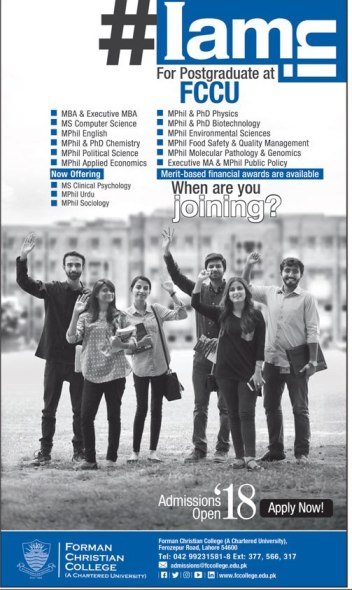